How does divorce affect your child’s personality? 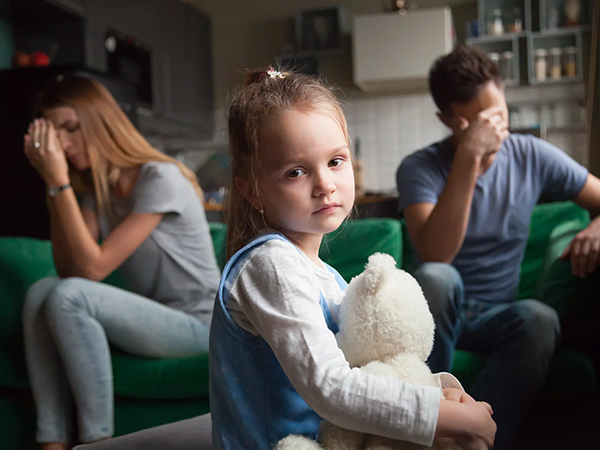 When parents decide to separate, bringing an end to the sand castles
and the fun and the happy times, children are probably the most
affected. Divorce is the most difficult phase for a family especially if
there are children involved. This is understandable as children seek
the love of both parents, and asking them to make a choice is unfair.

The effects of divorce have a long-lasting impact on children,
affecting their personalities drastically as they mature into adults,
sometimes affecting their own relationships as well. Consider this
fact highlighted by research: In the U.S.A, where divorce rates are
alarmingly high, the daughters of divorced parents have a 60% higher
divorce rate than those of non-divorced parents. The number is 35%
for sons in comparison.

Divorce has both short term and long term effects for children. Short
term effects involve a child becoming tense, nervous and anxious
and this is more in the case of younger children, heavily dependent
on both parents. In the aftermath of a divorce, concentrating on
studies might prove to be difficult and activities which once used to
enthral the child might lose their charm or appeal. Negative thoughts
and nightmares are also common. Mood swings, becoming irritable
and going into isolation with a sense of despair and delusion are also
common behavioural patterns. These short term effects of divorce
can curb a child’s psychological and physiological growth, and can
cause long-term impacts on their personalities.

Divorce also has several long-term effects on children
 Children may develop behavioural and social problems due to a
divorce, and in the long run, this may lead to violence and/or
the development of a criminal mind-set as the child becomes a
recluse or a social misfit.
 Children are consumed by self-doubts about the success of a
relationship when they grow up witnessing a divorce. They
suffer from trust issues and find it difficult to enter into a
relationship.
 Children might also enter the dark and murky world of drugs
and substance abuse to give vent to their frustrations and
anxiety. Studies are indicative of higher substance abuse in the
case of teenaged children with divorced parents.
 Depression is nothing but a mental health problem, and it’s
easier for kids with divorced parents to slip into depression and
withdraw themselves socially.
 All of the above lead to a child’s grades going down and
education being hampered.
We’ve categorized the effects of divorce on children of various age
groups to make you realize the magnitude of the problem right from
infancy to teens.
Effects of divorce on babies from birth up to 18 months
Infants can feel the tension in the air when there’s a divorce brewing
even though they don’t comprehend the reasoning and the
implications of the problem. But if the conflict persists, babies might
become irritable and clingy at the sound of raised voices or fights.
They also might be prone to frequent emotional outbursts. Some
signs of developmental delay might also crop up.

Effects of divorce on toddlers aged 18 months- 3 years
For a toddler, the parents are the mainstay for any emotional
support. Hence, if there is any disruption in domestic life, it might be
difficult for the toddler to come to terms with it. They might cry and
demand more attention than normal and show signs like thumb
sucking. They may resist being toilet trained and have difficulty
sleeping, not sleeping alone or develop unusual sleeping patterns.
Effects of Divorce on Pre-schoolers aged 3 to 6 Years
For pre-schoolers, the whole concept of divorce is something that’s
beyond their comprehension and the last thing that they want is
their parents to separate no matter how tense the domestic
situation might be. Sometimes, they might feel guilty as being
responsible for having caused this separation. They might also think
that their parents are divorcing them instead of each other and
eventually, be heartbroken over the loss of one parent.
Effects of divorce on kids aged 6 to 11 Years
School kids are naturally petrified of a fear of being abandoned
during a divorce. They might also blame one parent for the
separation and take sides with the other parent. In some cases, they
might accuse their parents of being selfish or mean and display their
anger in numerous ways.
A word of advice to all parents is to stick together even when the
going gets tough. Do it for the sake of the kids. In the event that
divorce becomes inevitable, make sure that both of you are involved
whole heartedly in raising your kid/s even if you are separated.
Was this article helpful? Write to us with your tips and suggestions.
Happy parenting!

How does divorce affect children's behaviour?
Mitali Das, Sydney.
During and after the divorce process, each child experiences
different levels of psychological trauma. Studies have shown that
children who experience divorce often have an increase in antisocial
behaviour, anxiety, and depression, along with increased delinquent
and aggressive behaviour.

What are the things that divorced parents can do to soften the effects of the divorce on their children?
Rukmini Kale, Mangalore.
 Keep visible conflict, heated discussions, and legal talk away
from the kids.
 Minimize the disruptions to kids&#39; daily routines.
 Confine negativity and blame to private therapy sessions or
conversations with friends outside the home.
 Keep each parent involved in the kids; lives.

At what age does divorce affect a child?
Priscilla Gomes, Goa
Academically, kids going through divorce may earn lower grades and
even face a higher dropout rate compared to their peers. These
effects may be seen as early as age 6 but may be more noticeable as
kids reach the ages of 13 to 18 years old.