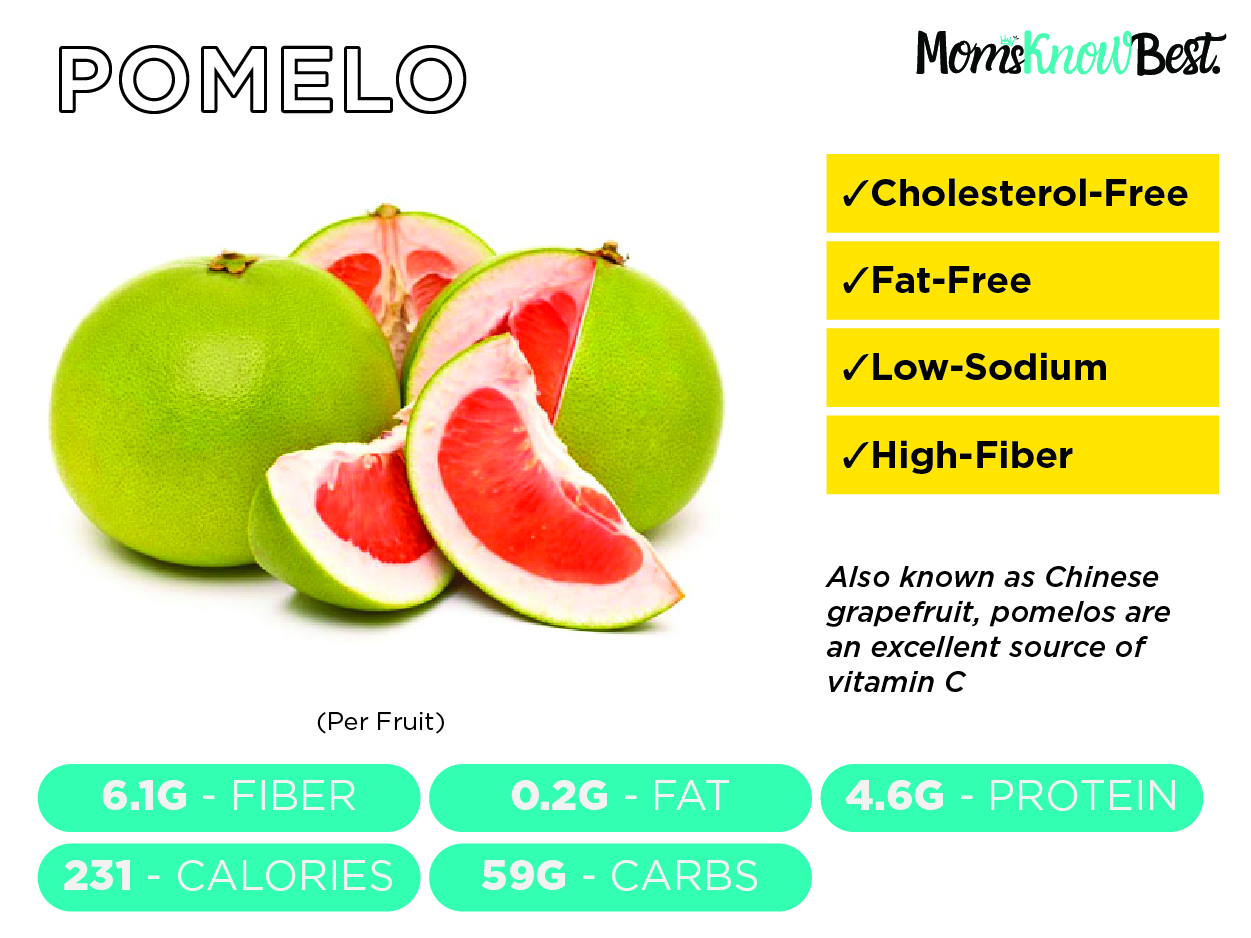 During pregnancy, women need proper nutrition to support their health as well as the growth of the foetus. Consuming fruits can be one of the best ways to hit the daily recommended intake. Pummelo or pomelo is an exotic citrus fruit that is highly recommended for soon-to-be mothers.

Pomelo  is a large citrus fruit with a thick outer skin. It has originated in Southeast Asia and Malaysia. Pummelo is the ancestor of commercial grapefruit and grows wild in Fiji, Tonga and Hawaii.

The pulp of the pummel can be white or pink depending on the variant. The sweet and tangy flesh is popular for its high Vitamin C content. However, the thick skin and seeds are also used in some cultures for their medicinal properties. The aromatic flowers of the pummelo tree are used in extracting perfume and the leaves are used for the essential oils.

Other minerals like zinc, copper, iron and sodium; and vitamins like riboflavin, thiamine, niacin and vitamin B can also be found in pummelo in fewer amounts.

The Many Health Benefits of Pomelo for Kids and Adults:

Reduces free radicals: Free radicals occur in the human body naturally. However, the build-up of free radicals can invite several health issues including cellular damage. Pummelo is a rich source of a powerful antioxidant like Vitamin C. Not only that, pummel has other antioxidants like naringenin, naringin and lycopene. Such an antioxidant-rich profile allows pummelo to reduce the accumulation of free radicals and keeps you healthy.

Boosts heart health: Higher amounts of bad cholesterol in your blood can be dangerous for the health of your heart. It can stick to the inner wall of the arteries and make it hard for the blood to flow properly. Pummelo has several antioxidants which can help in managing cholesterol level. The fibre in pummel can absorb the bad cholesterol to bring its level down.

Improves metabolism: Pummelo has citrus flavonoids like naringin and hesperidin which are associated with the treatment of metabolic disorders. Studies have found that the pummel peel extract can have positive effects on glucose metabolism as the polyphenolic compounds in the pummelo act as anti-diabetic agents. Pummel has also been linked to aiding weight loss.

Helps with skincare: Vitamin C and other antioxidants in pummelo can improve skin health very effectively. Antioxidants promote the skin-renewing process. They reduce inflammation and help the skin cells in the healing process. Pummelo may show anti-ageing effects and give blemish-free skin owing to the natural antioxidants.

Benefits of Using Pomelo during Pregnancy:

Citrus fruits like pummel are generally very good for health, especially during pregnancy. They keep you energetic and functioning as they have plenty of water along with essential nutrients.

Boosts immunity: Antioxidants like Vitamin C protect against infections and ailments. Women become vulnerable to diseases during their pregnancy. Vitamin C in pummelo promotes the production of white blood cells and boosts the immune system. With a strong immunity system, fighting against infections becomes easier.

Helps with digestion: Pummelo promotes the secretion of digestive juices and enzymes. Many women suffer from indigestion and other digestive issues due to poor food choices during pregnancy. Eating pummel can improve the digestive system and give a healthy digestive tract. The fibre in pummelo can relieve constipation as it acts as a natural laxative.

Controls weight: Pummelo can effectively suppress appetite. With pregnancy, comes the intense cravings for unhealthy foods. Pummelo helps you control your binge eating habit and unnecessary hunger pangs. You can replace high-calorie foods with pummelos as they are extremely low in calories and promote satiety. It makes controlling weight gain easier for you.

Risk of Using Pomelo during Pregnancy:

If consumed in moderation, pummelo is quite safe during pregnancy. It can help pregnant women to avoid several health complications. However, there can be some side effects which you should keep in mind.

Tasty Ways of Including in Your Diet:

Eating fresh pummelo with some sprinkled sugar on top of them is quite common in Southeast Asian countries. They can also be used as an ingredient in some tasty dishes.

Fun Facts about pummelo that you didn’t know about:

Pummelo is an excellent source of antioxidants that may promote good health in a pregnant woman. Adding pummelo to your pregnancy diet after consulting your doctor can be very beneficial for the overall health of you and your baby.

Mangoes have a unique sweet and sour taste, making them a great favourite among pregnant women....

You have to engage in a healthy diet for your pregnancy to proceed smoothly. It’s also important...

When you are expecting a baby, you are constantly on the lookout for foods to avoid and foods...

Ragi porridge is one of the most recommended and nutritious meals you can give your baby....