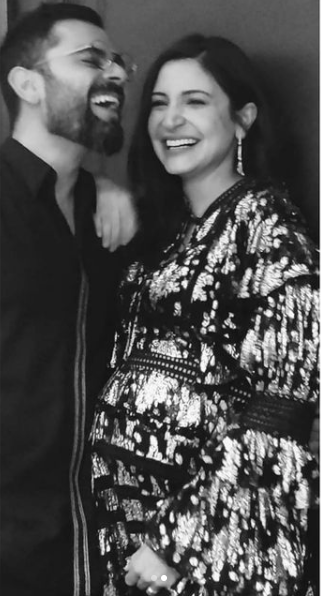 and welcome to the wonderful world of parenting Suresh Raina

Indian cricket captain Virat Kohli and Bollywood actor/producer Anushka Sharma who have been nicknamed #Virushka by their fans and followers are now the proud parents of a baby girl.

"We are thrilled to share with you that we've been blessed with a baby girl this afternoon. We thank you all for your love, prayers, and good wishes. Anushka and the baby are both healthy and we are feeling beyond blessed to start this new chapter of our lives. We hope that you can respect our privacy at this time.

But the trigger happy paparazzi are desperate to click some photos. Virushka have requested the paparazzi to give their family some privacy and avoid snapping photos of their first child. They have also formally written to the entire paparazzi fraternity about respecting their daughter's privacy, assuring them that they would share the content when the time is right.

The star couple do not want their new-born to be disturbed at any cost. They had put strict restrictions at the Breach Candy hospital in Mumbai where the baby was born. No gifts were accepted and even the entry of close relatives had been put on hold at the hospital. The visitors in the nearby rooms were also not allowed to have a look at the new-born.

Congratulatory messages have been pouring in ever since. We loved Suresh Raina’s tweet as it resonated with our feelings. In an earlier article, we had suggested baby names for both boys and girls for Virushka. We would urge them to consider the names of the girls we had so carefully and lovingly selected for them.

The tweet by Ravichandran Ashwin’s wife Prithi is pertinent in another context. This is what she had to say.

Congratulations. One more baby girl in the gang!

Many Indian cricketers have been blessed with a baby girl (Ashwin included) right from Kapil Dev to Sourav Ganguly to MSD to Gautam Gambhir to name a few. For those cricket fans who were hoping that these cricketing legends would produce worthy heirs who would be the GEN X of Indian cricket, let us remind you that we also have a strong women’s cricket team now. The girl gang could prove mighty effective there!

Let’s take a look at some other Indian cricketers who have been blessed with their first daughter recently.

Indian speedster Umesh Yadav and his wife Tanya announced the arrival of their first child, a baby girl on the 1st of January. The cricketer took to his Instagram handle and wrote: "It's a girl."

Too bad Daddy Yadav got injured and was out of the series in Australia. But he gets time to spend with his baby girl now.

Sunrisers Hyderabad and now Indian pacer T Natarajan and his wife Pavithra welcomed their firstborn during the Indian Premier League (IPL) Season. It’s been a dream come true for Nattu as he was selected only as a net bowler for the Indian cricket team but his performance was so impressive that he was drafted in the main squad. Left-arm pacer Natarajan says, “"My daughter's birth has proven very lucky for me.” We agree!

But poor Nuts is yet to see his child as he flew straight to Australia from the UAE. Unlike the Indian captain who chose to be beside his wife during her delivery (and rightly so) Nattu had to play the game to deliver and cement his position in the team. We wish Natarajan a joyful reunion with his family. Please win the series for us and your new-born!

Let’s take a look at some other role-model Indian cricketers and fathers.

Mumbai Indians skipper and vice-captain of India, Rohit Sharma became a father in 2019. His daughter is named Samaira and she was born after 3 years of marital bliss between Rohit and his partner Ritika. The adorable Samaira is 2 years old now.

Like father like daughter! It is only fitting that Super King MSD’s daughter Ziva Singh Dhoni is a sensation on social media. The little girl has become the favourite of all Indian cricket fans thanks to her chirpiness and liveliness on and off the stadium. She is also Daddy’s world!

Sourav once said that Sana is one of the biggest gifts God has given him. The Indian cricket team’s captaincy is another gift for sure and this man led the Indian team to greatness. Like a good cricketer and administrator, Sourav has also been a good father. He has said that he will motivate Sana to pursue whichever career she chooses to take up in the future.

In an interview, Suresh Raina had said famously after his daughter was born, “This is even more special because both Priyanka (his wife) and I wanted a daughter and God fulfilled our wishes. Lakshmi aayi hai ghar main upar wale ke aashirwad se. Ab aagey mazaa aayega life mein.”

Bhajji became a proud papa ji in 2016. Harbhajan Singh and wife Geeta Basra’s little angel was named Hunaya Heer Plaha. Harbhajan and Heer are one of the most adorable father-daughter Jodi among the Indian cricketer celebrities.

The Hariyana Hurricane’s daughter Amiya was born after a 14 year wait in 1996. That’s why she’s extra special for Paaji. Amiya is studying currently at the University of St. Andrews in the United Kingdom.

With so many colleagues as proud fathers of baby girls, Virat Kohli will never lack any advice he needs on how to be a good father. Amen to that!

Liked this article? Write in to us saying why daughters are special!